A downloadable GameMaker Extension for Windows

**Looking for static models? Check out my other free export script here: [Blender2GM]**

This is M's ModelKit - Export rigged, animated models from Blender and use them directly in GameMaker! Written in pure GML, the system is as cross-platform as GameMaker itself. This is currently the ONLY 3D animated model system I know of that exports straight from Blender and imports directly into GameMaker, simplifying the process of model creation and iteration massively. Models are animated by shader, to keep load off the CPU.

I've constructed a sort of material system using scripts for this too. This will be explained in the video guide. I encourage people to create their own shaders and materials compatible this system and share them with the community!

SPECIAL NOTES FOR HTML5:
While loading models and rendering meshes works, there's a bug with bone math returning NaN that I need to pinpoint and fix. Do not get this if you intend only to use it with HTML5 yet - use something like Unity instead
The system is otherwise tested working on:

As Mac works, it is likely Linux works. I just don't have a machine set up to properly test this though. I do not own UWP to test those platforms, but they should work since Windows works and they're both DX11 targets.

Of course, you're free to use this system in any project, commercial or personal, as long as you don't redistribute the code or included resources. Woo.

The downloadable test executable is just a compiled version of the demo project.

It includes demos on:

It also includes a custom unlit, no-zwrite material for rendering the face!

In future, it will include a simple realtime shadow demo.

Assets (models, textures) included in the demo project are fine for personal/test usage, but are not for commercial/public usage or redistribution.

Already own this on the GameMaker Marketplace? Email me at MaddeStudios@gmail.com with your order number and I'll give you a key!

In order to download this GameMaker Extension you must purchase it at or above the minimum price of $145 USD. You will get access to the following files: 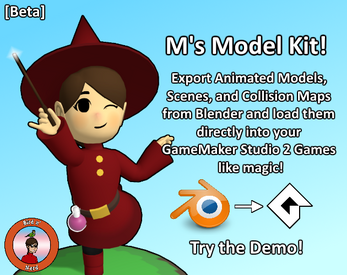