This is a thing designed to make building vertex buffers manually a bit less tedious, by letting you switch between primitive types during a build (at least for triangles). It mostly exists to simplify code.

I made it because I was building a vertex buffer and was like "this is really tedious. If only I could mix primtive types so I didn't need to repeat so much code or build many buffers, thus slowing down rendering". Or something to that effect.

So I took a couple of days and I made it work.

Then, you just gotta submit as a pr_trianglelist when vertex_submit-ing (because we aren't really changing primitive type, I just emulated them with triangle lists)

Cool Thing? It's plug-n-play. You can add it to any project and it will (should?) not break it. You build vertex buffers in the exact same way with the exact same functions too, thanks to function substitution using macros. Just slap in the vertex_buffer_set_buildmode function when you wish to change type, and you're good to go.

Also included is a vertex_buffer_macros script that allows some user configuration.

It also fixes vertex_argb on Windows. I'll remove that fix if/when that gets fixed in GameMaker (Here's the bug report), since it would re-break it in that case (there's a macro to disable the fix though in the meantime)

I've included a demo project (the one used to generate the image) so you can see how it works and play with it a little. It does use the vertex() function instead of all the individual vertex_* functions though, just because I felt like it. Still fully compatible with those though,

Check out the post on my Website, where I go into more detail about how this actually works.

There are a few other functions too! 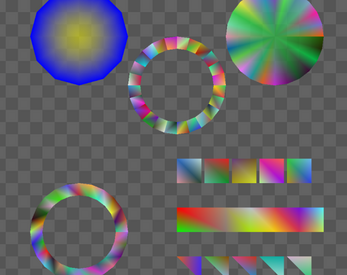